The construction of the Chickahominy Power Generating Station is expected to provide significant environmental benefits to Charles City County, Virginia and the broader PJM power region. Due in large part to it displacing older, inefficient and polluting power plants which can be less relied upon to produce electricity. The facility will use clean-burning natural gas to produce more than 1,600 megawatts of electric power, enough to supply approximately 1.5 million homes throughout the region.

Using state-of-the-art technology, the plant will achieve the lowest possible air emissions and will operate with low noise. The dry-cooling technology used by the plant means that water usage is 99 percent less than a same-size plant using traditional water based cooling technologies.

Additionally, the facility’s Mitsubishi Power supplied primary power production technologies accommodate the use of the recently announced Mitsubishi Power “green-hydrogen” technologies and position the Chickahominy Power Station to be a long-term reliable and affordable component of Virginia’s efforts to aggressively reduce carbon emissions.

Allowing New Generation Technology to Enter the Marketplace is Important

The charts below show how the demand for electric generation in Virginia continues to grow while emissions of CO2 decline.

Below is a comparison of CO2 emissions from a 1600 MW facility if based upon natural gas technologies vs. a typical coal fired facility. 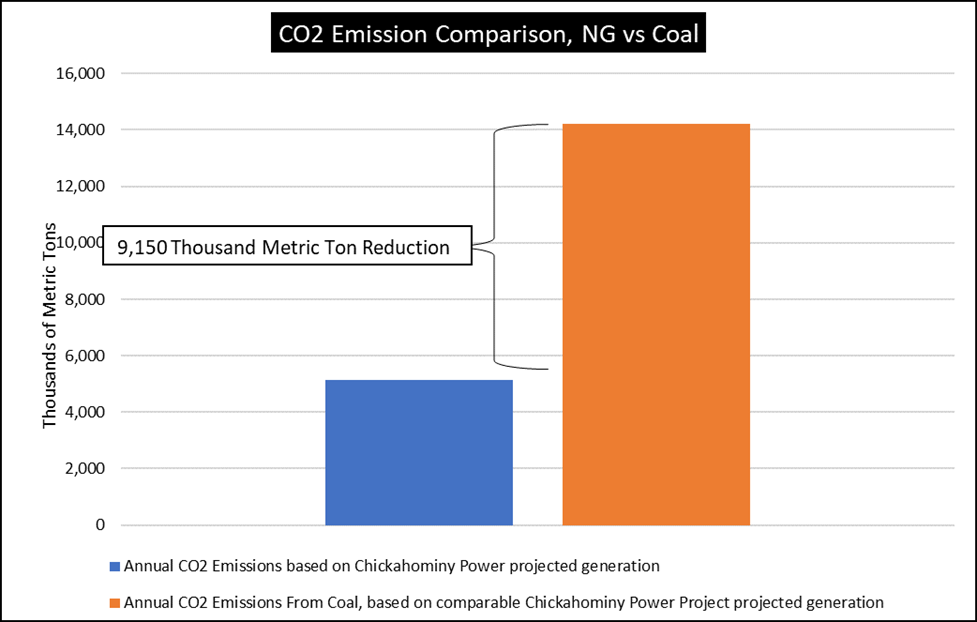 Conservation of Water - a differentiator of Chickahominy Power:

The Chickahominy Power Generation Project utilizes air-cooling technology to minimize it use of water. By so doing, the Project will only required 30 million gallons of water each year compared to approximately 6 billion gallons per year if the more conventional water cooling technologies had been utilized. This represents a water use reduction of over 99.5%. 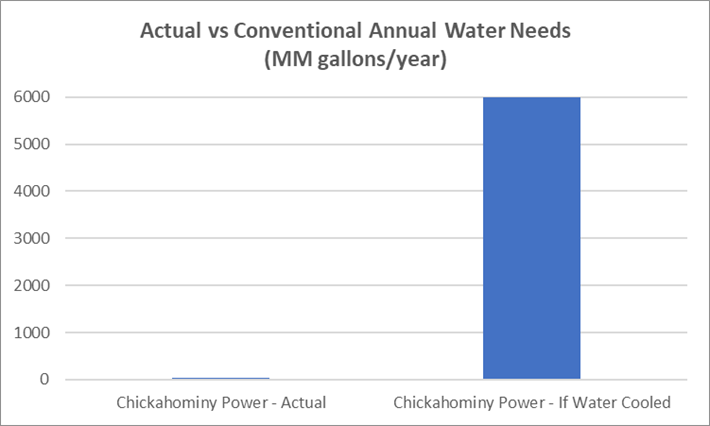 As published in the United States Energy Information Administration publication “Today in Energy – Water Withdrawals by U.S. Power Plants Have Been Declining”, the average national water demand by power generation in 2017 was 13.0 gallons/kilowatt-hour. The Chickahominy Power average water use of 57.1 gallons per minute and the proposed plant power output of 1,600 megawatts yield a demand of 0.002 gallons/kilowatt-hour - over 6,000 times less than the national average for power generation.